When You Wish Upon An Iron Star

Ever notice the iron stars along the sides of antiquated buildings in St. Charles and other historic places? You know the ones, with the trickle of dried rust running down the brick wall underneath them.

As it turns out, the iron ornaments were added to 19th century structures for reasons other than decoration. Constructed first in those buildings were the solid brick walls. Wooden floors were added to the interiors later. Large bolts ran between the walls for structural soundness, connected at either end with, you guessed it, iron stars.

There’s a woman, a history buff really, in St. Charles who knows all about the iron ornaments, and a whole lot about historic structures as well. She named her business for them.

After graduating college in 1967 with a degree in Journalism, Pitman worked for a book publisher in Chicago, IL. She soon returned home to St. Charles County, however, after realizing she missed the small town atmosphere and the foliage.  “I didn’t want to live where every tree had been planted by someone,” she said.

A native of Wentzville, MO, Pitman returned to her roods and purchased a two-story Victorian house at 4th and McDonough in 1970 and began her first rehabilitation project.  “At that time, bums were sleeping in the doorways in St. Charles,” Pitman said. And the notion for an urban renewal project in the area was just beginning to take form, she said.

Pitman began her own revitalization project with 416 South Main, the old Salvation Army building. From 9 to 5, she worked in graphic and product design for Falcon Products. By night and weekend, she worked on her house. It took her a year and a half to finish the place, which went on to house two apartments and several retailers. “I began working on my house and I was intrigued by what the potential was down here,” Pitman said.

Pitman kept the building for 20 years before trading it for 213 and 215 North Main, which today holds her office along with Dick Sacks, owner of The Sacks Group a Business/Management Consulting firm and graphic design and Internet firm called Snap Creative, respectively.

Pitman also worked with several partners rehabilitating buildings in the Soulard and Central West End areas of St. Louis during the 1970’s and 1980’s. She even did some work on Laclede’s Landing. But the St. Louis gig was short-lived, she said, as once again, St. Charles County was calling.

In 1985, Pitman bought the building 117 South Main Street. The now burgeoning Quilogy enterprise occupies the building today. But, Pitman was the original designer before Randy Schilling, owner of Quilogy, purchased the building in the late 1990’s from her.  The building has also seen such tenants as the humanitarian organization Friends In Sending Help (FISH), a printer, a newspaper, a tire broker, an art broker and even a boxing ring.  Pitman said she went through that place “section at a time. It took me a year to do the outside. By the next year, the people were gone and I went through there a section at a time.”

The building was constructed in 1878, heated by a single boiler, and was at one time used for city detectives. The original 14-foot ceilings had been dropped to eight feet for energy efficiency and modernism at some point, she said.

Pitman said she has watched the slow phenomenal transformation of Historic Main Street in St. Charles for many years, recalling a time when she could have purchased houses along “Stone Row” on the east side of South Main for $13,000 a piece. Today the buildings are worth more than a quarter million.

The building in which her office is located at 213 North Main Street was another gem under the surface. Like the Quilogy building, the ceilings had been dropped, but as she peeled back the surface, she found embossed tin plates with all the pageantry of the day. “The plaster was a wreck so I exposed the brick.  For the most part you can find the evidence of what was there before and fix it in some way or get something similar.”

Pitman is currently working on 136 South Main Street, which was built in 1880.  the building history held the St. Charles Post Office, a meat locker, a hardware store, a grocery, and a newspaper publisher.

She compares a photo of the structure in its glory days to today. The decorative cornice in the center is missing.  The back wall was falling out.  The shop front was in disarray. When she finishes the approximately $1 million endeavor, the building will look much like it did in the 19th century. She hopes to rent the space there to retailers and businesses which need office space.

Pitman said she comes from a long line of craftsman and is the ninth generation of her family to live and work in St. Charles County.  Among them, a black smith, carpenter, well driller and others.

Pitman said she enjoys playing caretaker of the architecture of old. “I want to take care of them now. These are from a time when people had a real interest in expressing themselves through their buildings. You can almost see the old Victorian guy standing on the front porch saying, “That’s my building. I built this. I had the Mason’s from St. Louis come and do the special brickwork’ These are things that give us a sense of being anchored, a context of who we are. There’s a comfort level in being surrounded by old things that are well taken care of.”

In all her years of rehabilitating old and historic structures Pitman said she would most like to be remembered for what she didn’t do---change things.  “I’ve worked really hard to keep it real and to let the architecture talk for itself.  Sometimes I wonder what the kids growing up now are going to do. What will their architecture and social culture say for them? these buildings are not like Disney World that was built to entertain you, but this is a place where people really worked and sweat and lved.”

Pitman said she may have made her fortune if she “didn’t have the nasty habit of doing another building. I swear every time I’m never going to do another. It just seems like it needs you. It needs to be done.

There is a great story about Pitman in Street Scape Magazine.  Published in the “If these walls could talk” editorial feature of the Fall 2006 issue. 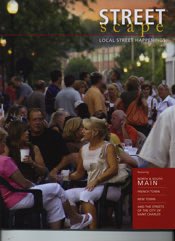